ANL MM series Q-switched oscillators are designed as extremely reliable and stable nanosecond seeding sources producing hundreds mJ pulses from a compact sized body. Simple access to critical compartments of the oscillator allows for easy maintenance. The higher M² version uses a pro-longed oscillator design that allows a much higher number of modes to oscillate which results in M² value up to 90. In this case the beam profile becomes very homogenous and flat which can be useful in a number of applications.

Triggering of the laser is possible from built-in internal or external pulse generator. Pulses with TTL levels are required for external triggering. Laser pulses have less than 0.5 ns RMS jitter with respect to Q-switch triggering pulse in both cases.

System control is available through control pad, USB and LAN interfaces (RS232 as optional). The system can be controlled from personal computer with supplied software for Windows operating system. 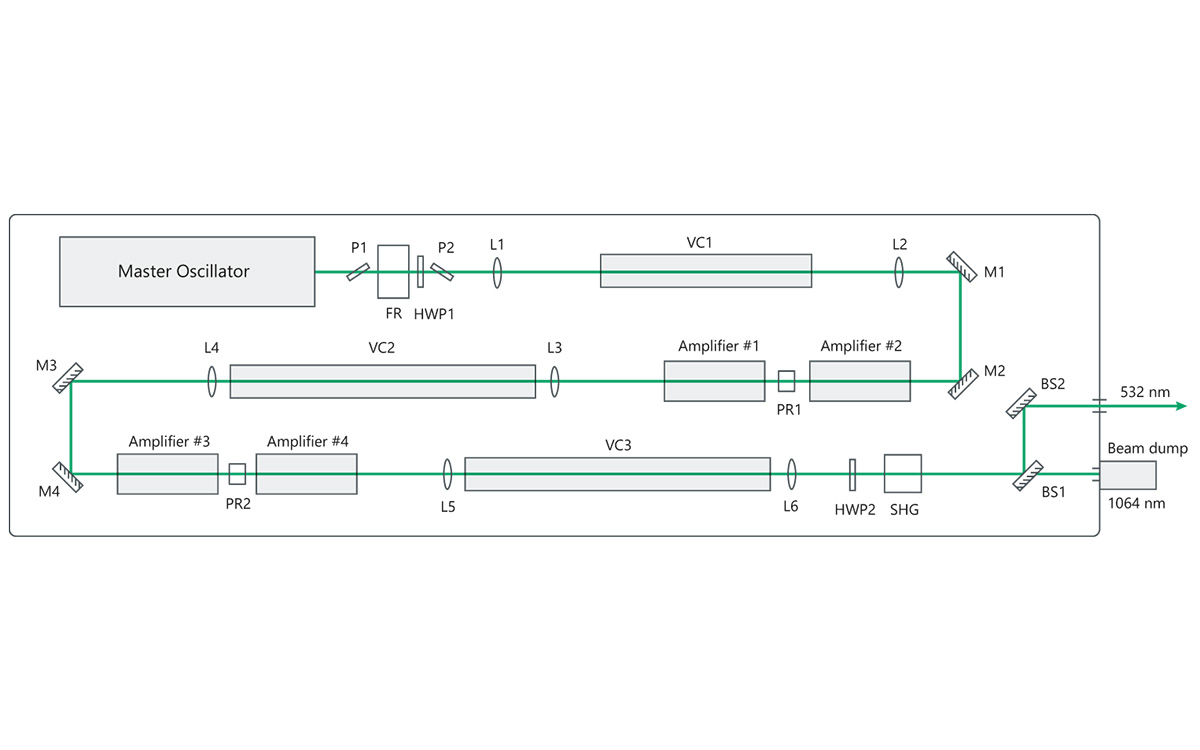 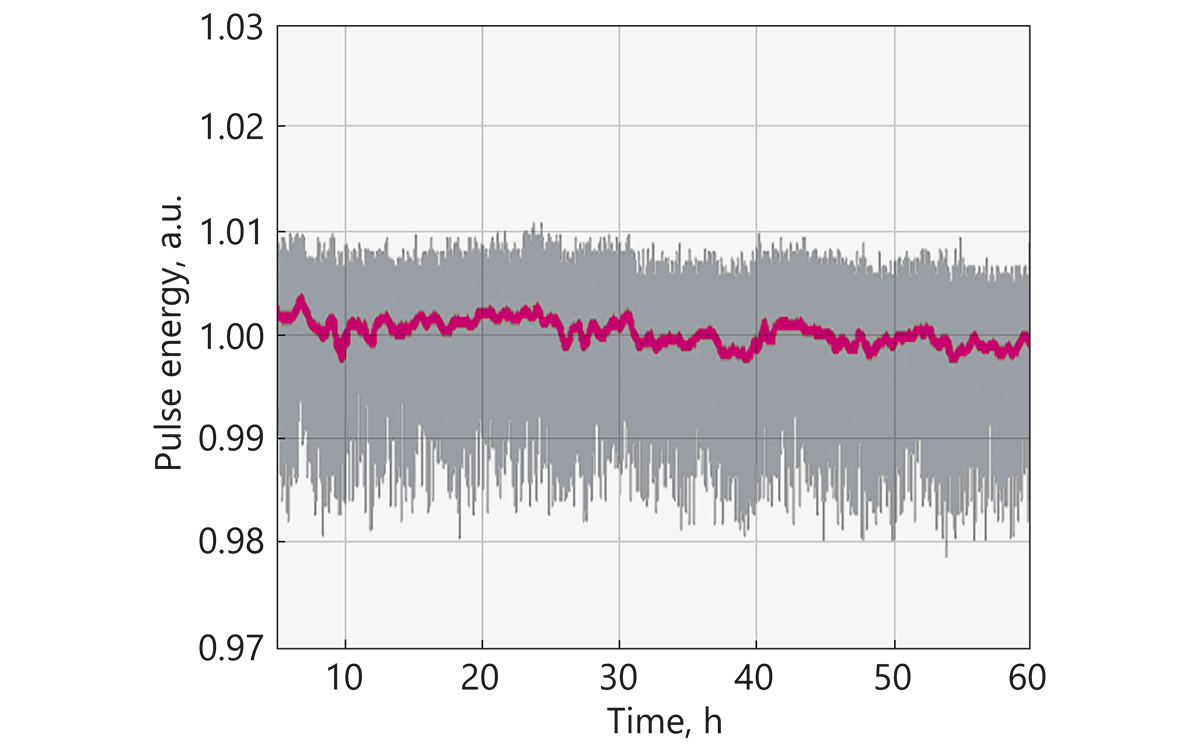 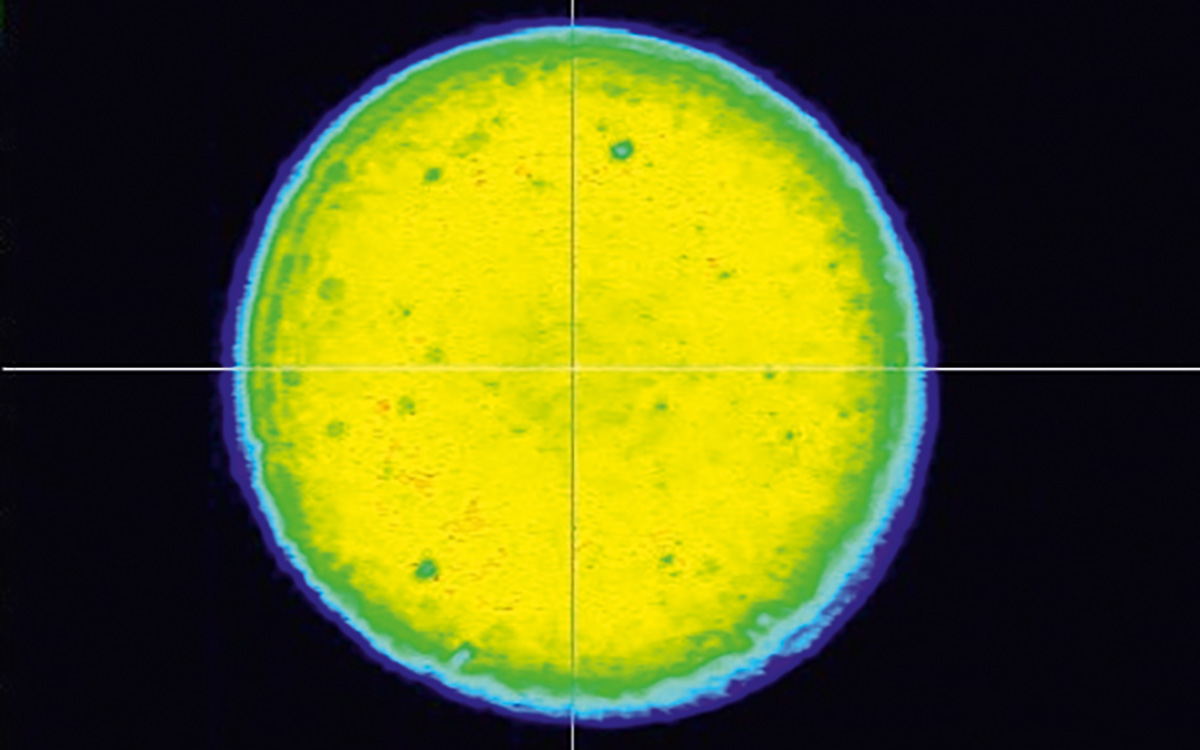 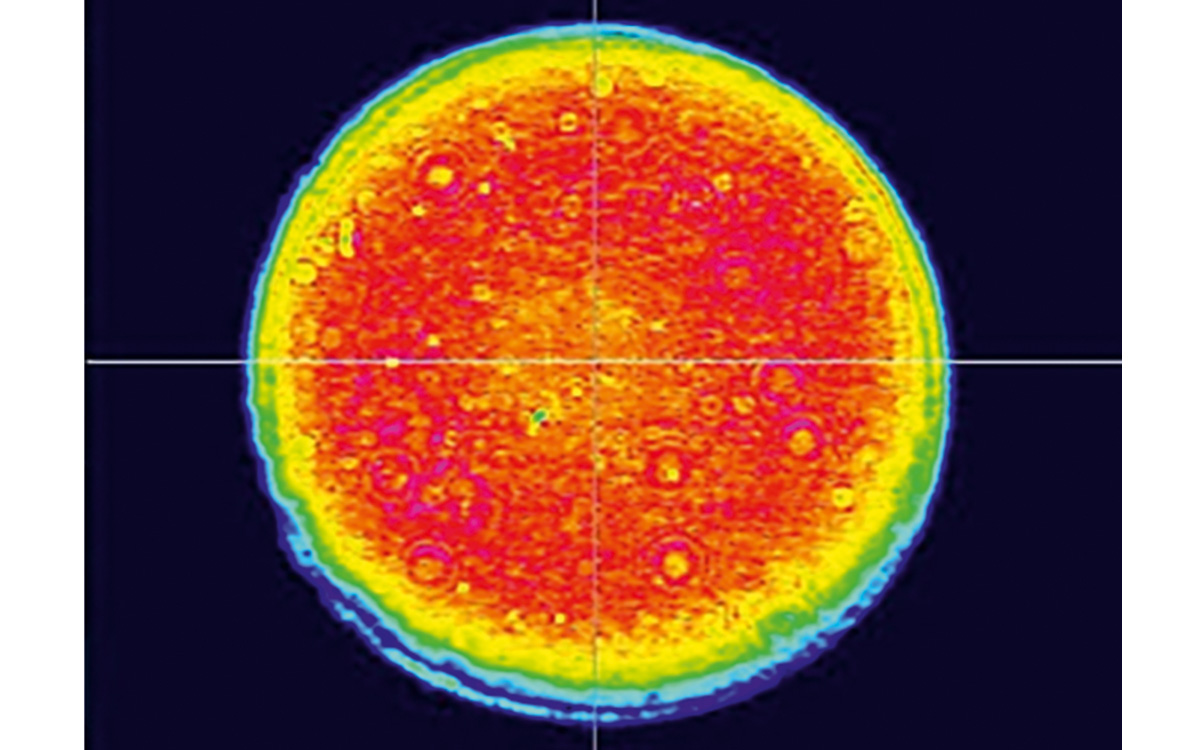 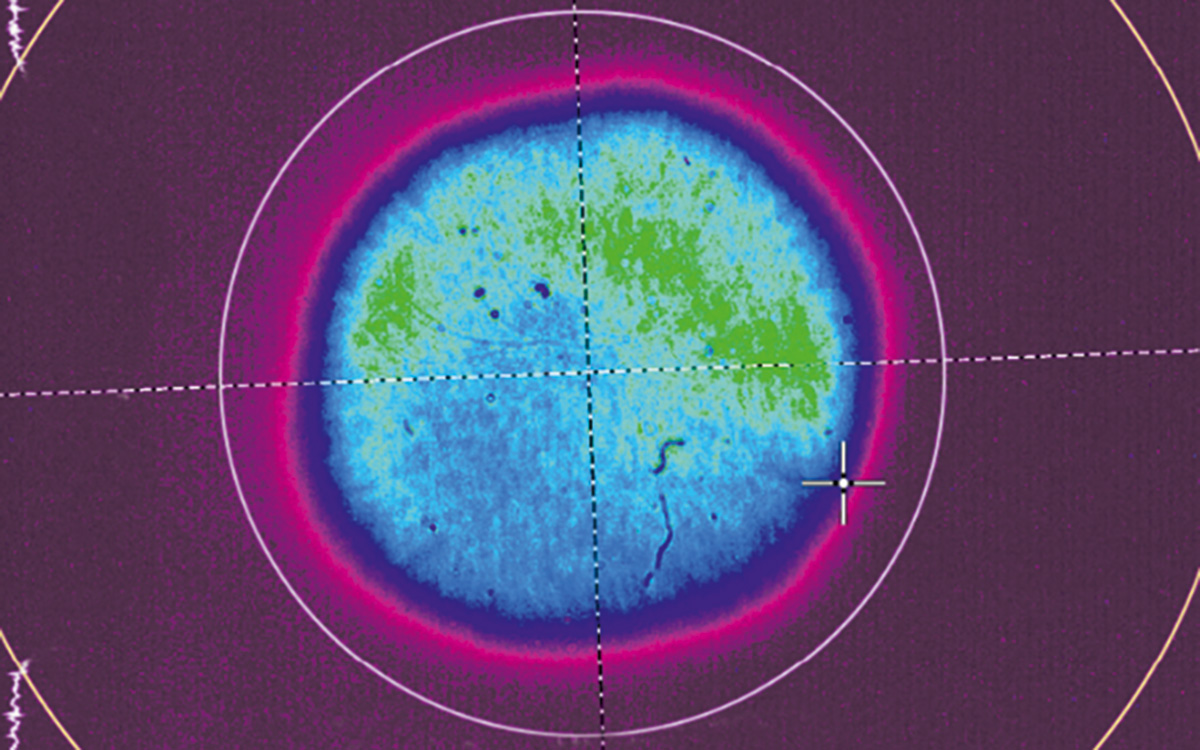 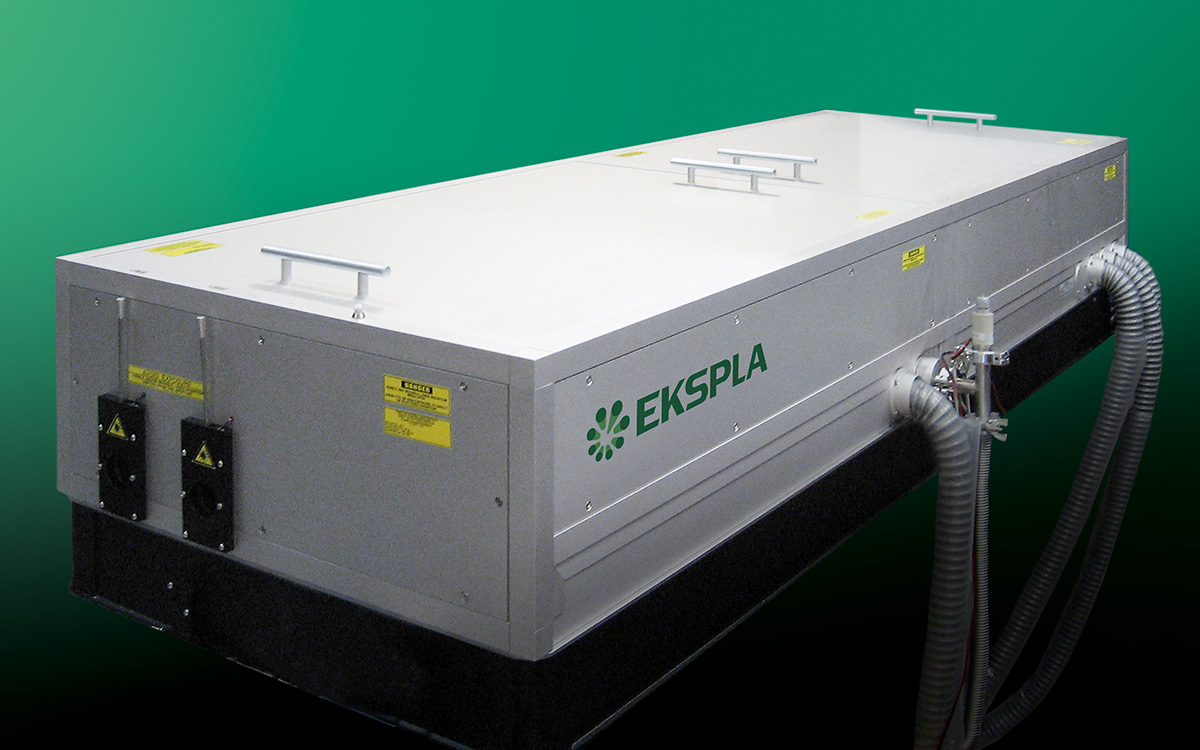 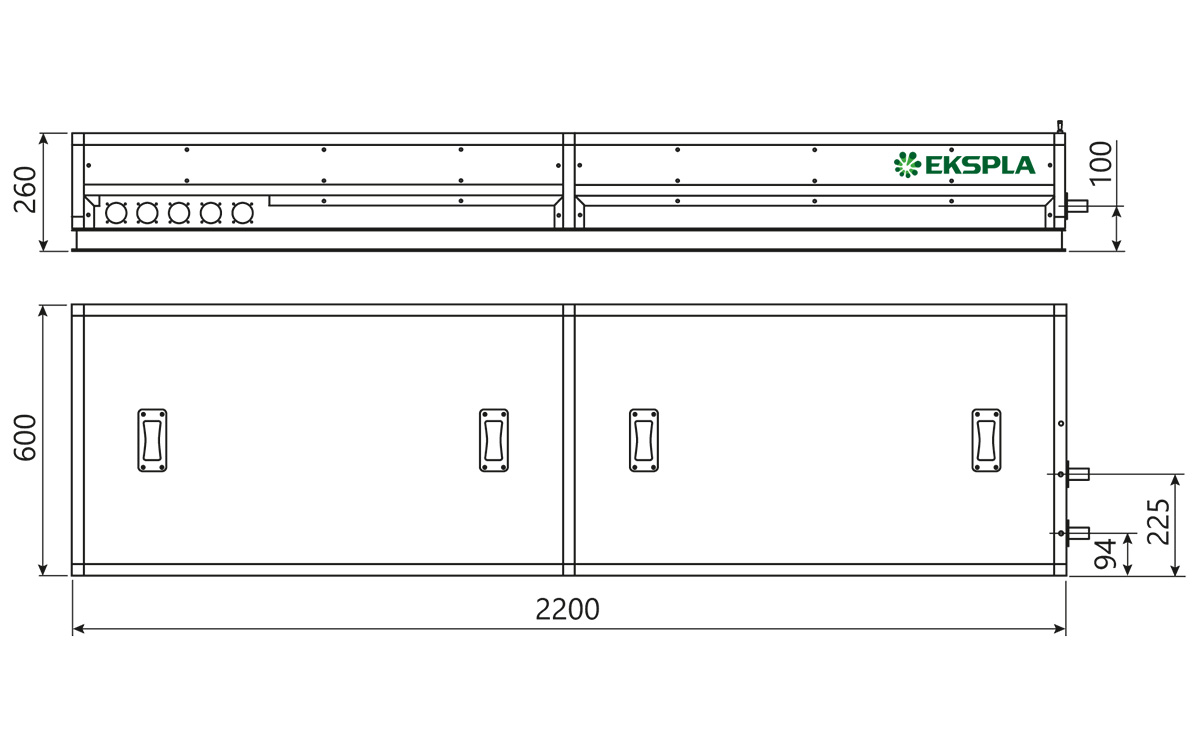 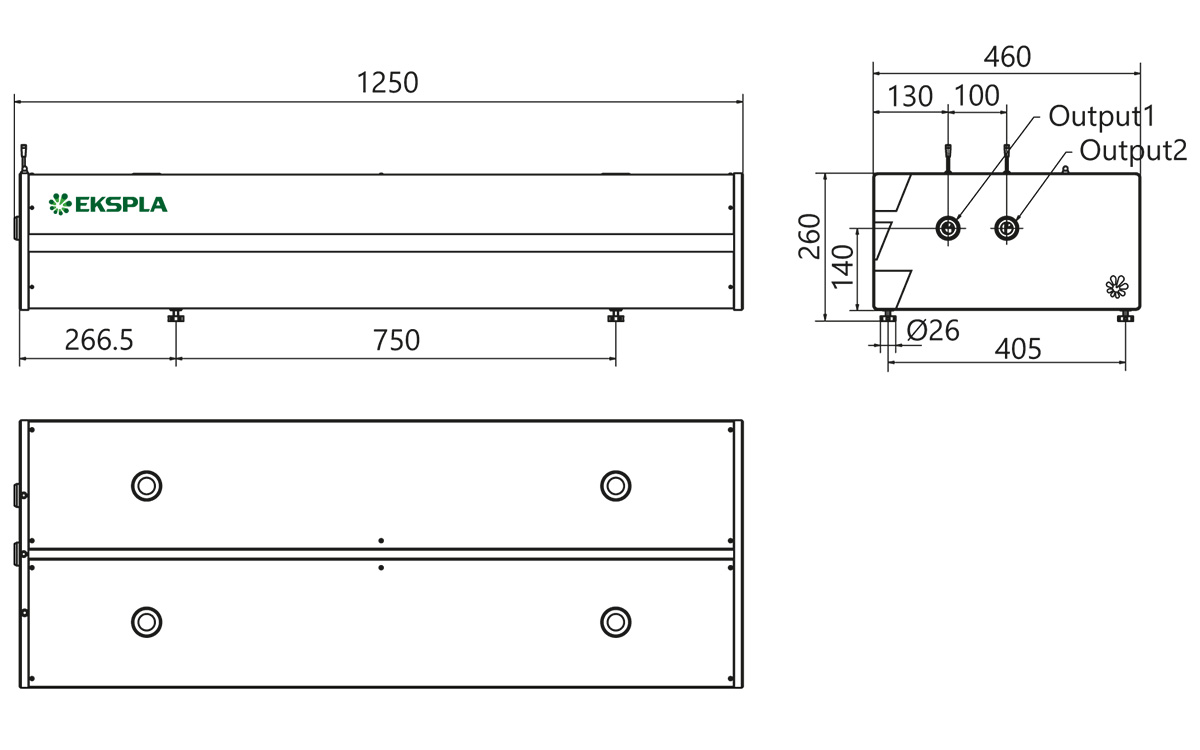 We optimized the parameters of a laser-produced plasma source based on a solid-state Nd: YAG laser (λ = 1.06 nm, pulse duration 4 ns, energy per pulse up to 500 mJ, repetition rate 10 Hz, lens focus distance 45 mm, maximum power density of laser radiation in focus 9 x 1011 W/cm2) and a double-stream Xe/He gas jet to obtain a maximum of radiation intensity around 11 nm wavelength. It was shown that the key factor determining the ionization composition of the plasma is the jet density.With the decreased density, the ionization composition shifts toward a smaller degree of ionization, which leads to an increase in emission peak intensity around 11 nm.We attribute the dominant spectral feature centred near 11 nm originating from an unidentified 4d-4f transition array in Xe+10...+13 ions. The exact position of the peak and the bandwidth of the emission line were determined. We measured the dependence of the conversion efficiency of laser energy into an EUV in-band energy with a peak at 10.82 nm from the xenon pressure and the distance between the nozzle and the laser focus. The maximum conversion efficiency (CE) into the spectral band of 10–12 nm measured at a distance between the nozzle and the laser beam focus of 0.5 mm was CE = 4.25 ± 0.30%. The conversion efficiencies of the source in-bands of 5 and 12 mirror systems at two wavelengths of 10.8 and 11.2 nm have been evaluated; these efficiencies may be interesting for beyond extreme ultraviolet lithography.

Laser-produced plasmas are intense sources of XUV radiation that can be suitable for different applications such as extreme ultraviolet lithography, beyond extreme ultraviolet lithography and water window imaging. In particular, much work has focused on the use of tin plasmas for extreme ultraviolet lithography at 13.5 nm. We have investigated the spectral behavior of the laser produced plasmas formed on closely packed polystyrene microspheres and porous alumina targets covered by a thin tin layer in the spectral region from 2.5 to 16 nm. Nd:YAG lasers delivering pulses of 170 ps (Ekspla SL312P )and 7 ns (Continuum Surelite) duration were focused onto the nanostructured targets coated with tin. The intensity dependence of the recorded spectra was studied; the conversion efficiency (CE) of laser energy into the emission in the 13.5 nm spectral region was estimated. We have observed an increase in CE using high intensity 170 ps Nd:YAG laser pulses as compared with a 7 ns pulse.

In this work, we present a compact laser-produced plasma source of X-rays, developed and characterized for application in soft X-ray contact microscopy (SXCM). The source is based on a double stream gas puff target, irradiated with a commercially available Nd:YAG laser, delivering pulses with energy up to 740 mJ and 4 ns pulse duration at 10 Hz repetition rate. The target is formed by pulsed injection of a stream of high-Z gas (argon) into a cloud of low Z-gas (helium) by using an electromagnetic valve with a double nozzle setup. The source is designed to irradiate specimens, both in vacuum and in helium atmosphere with nanosecond pulses of soft X-rays in the ‘‘water-window” spectral range. The source is capable of delivering a photon fluence of about 1.09 x 103 photon/µm2/pulse at a sample placed in vacuum at a distance of about 20 mm downstream the source. It can also deliver a photon fluence of about 9.31 x 102 - photons/µm2/pulse at a sample placed in a helium atmosphere at the same position. The source design and results of the characterization measurements as well as the optimization of the source are presented and discussed. The source was successfully applied in the preliminary experiments on soft X-ray contact microscopy and images of microstructures and biological specimens with ~80 nm half-pitch spatial resolution, obtained in helium atmosphere, are presented.

We have observed extreme ultraviolet (EUV) spectra from terbium (Tb) ions in optically thin and thick plasmas for a comparative study. The experimental spectra are recorded in optically thin, magnetically conned torus plasmas and dense laser-produced plasmas (LPPs). The main feature of the spectra is quasicontinuum emission with a peak around 6.5-6.6 nm, the bandwidth of which is narrower in the torus plasmas than in the LPPs. A comparison between the two types of spectra also suggests strong opacity effects in the LPPs. A comparison with the calculated line strength distributions gives a qualitative interpretation of the observed spectra.

Laser-induced breakdown spectroscopy (LIBS) technology is an appealing technique compared with many other types of elemental analysis because of the fast response, high sensitivity, real-time, and noncontact features. One of the challenging targets of LIBS is the enhancement of the detection limit. In this study, the detection limit of gas-phase LIBS analysis has been improved by controlling the pressure and laser pulse width. In order to verify this method, low-pressure gas plasma was induced using nanosecond and picosecond lasers. The method was applied to the detection of Hg. The emission intensity ratio of the Hg atom to NO (IHg/ INO) was analyzed to evaluate the LIBS detection limit because the NO emission (interference signal) was formed during the plasma generation and cooling process of N2 and O2 in the air. It was demonstrated that the enhancement of IHg/INO arose by decreasing the pressure to a few kilopascals, and the IHg/INO of the picosecond breakdown was always much higher than that of the nanosecond breakdown at low buffer gas pressure. Enhancement of IHg/INO increased more than 10 times at 700 Pa using picosecond laser with 35 ps pulse width. The detection limit was enhanced to 0.03 ppm (parts per million). We also saw that the spectra from the center and edge parts of plasma showed different features. Comparing the central spectra with the edge spectra, IHg/INO of the edge spectra was higher than that of the central spectra using the picosecond laser breakdown process.