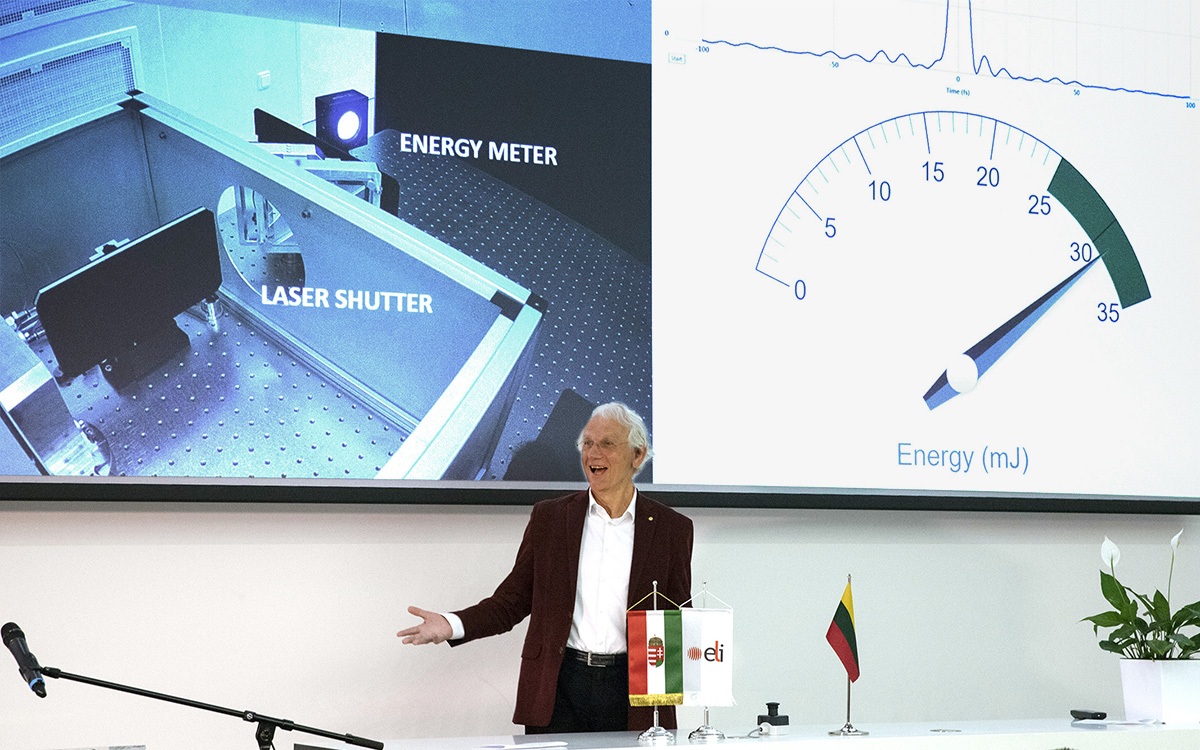 That is how Single Cycle Femtosecond high intensity laser system SYLOS  has been launched in ELI-ALPS Kutatóközpont facility in Szeged, Hungary. ELI-ALPS in Szeged, Hungary is one of the three pillars of the Extreme Light Infrastructure, which has been built in order to deepen the knowledge in fundamental physics by providing high repetition rate intense light pulses on the attosecond timescale. The Szeged facility will stand out from the institutes producing the highest intensity laser pulses in the world with its highest repetition rate and shortest pulses.

The Single Cycle Laser SYLOS, which employs OPCPA technology invented at Vilnius University Lithuanian research group of prof. Algis Piskarskas, has been designed and manufactured by a consortium of two Lithuanian companies – EKSPLA and LIGHT CONVERSION. Two biggest Lithuanian laser companies have pooled their two technologies together. In this way, we have obtained a result which, in our opinion, would not have been possible for a single company alone. In creating this laser, we applied the latest knowledge based on the most recent scientific studies and general projects.

The consortium won SYLOS1 procurement tender in 2014. It took 5 years to design and build the system, which produces Carrier Envelope Phase (CEP) stabilized laser pulses with a peak power of 4.9 TW and an average power of ~32W at 1 kHz repetition rate.

This state-of-the-art laser system opens the way for the investigations of nonlinear extreme ultraviolet and x-ray processes, four-dimensional imaging, as well as various industrial, biological and medical applications. Beyond fundamental research, this laser system will be utilized in the project aiming the reduction of the radioactive radiation of used nuclear fuel by a laser-related transmutation method, based on the idea and with the cooperation of the Nobel laureate Gérard Mourou and his coworkers.

“First of all I would like to start from thanks, big thanks for dreamers like Prof Mourou who raised ideas reaching beyond horizon, big thank to Hungary, to the people of Hungary, who took the challenge to go beyond the horizon in laser technology. And also big thanks to Lithuanian science leaders like Prof. Piskarskas, who created laser school, the field of knowledge in Lithuania. And what we have, we have a combination of dream, challenge and knowledge allowing us to create the biggest laser among the fastest – and therefore also the fastest laser among the biggest.” – noted Kęstutis Jasiūnas, EKSPLA CEO.

“The main technological backbone of ELI-ALPS will be optical parametric chirped-pulse amplification (OPCPA) of few-cycle to sub-cycle laser pulses. Pumped by dedicated all-solid-state short-pulse (ps-scale) sources and their (low-order) harmonics, this approach will be competitive with conventional (Ti:sapphire-laser-based) femtosecond technology in terms of pumping efficiency and will dramatically outperform previous technologies in terms of average power, contrast, bandwidth, and – as a consequence – degree of control of the generated radiation.” – said Martynas Barkauskas, CEO of LIGHT CONVERSION.

“By leading of Hungarian ELI team scientists and engineers, their technical tasks and using technologies developed at Vilnius University, technologies mastered by two Lithuanian laser companies EKSPLA and LIGHT CONVERSION, most advanced technologies from other countries like France, United States, Germany and more others  we have obtained a unique combination: extreme parameters plus extreme user friendliness. “ – added Kestutis Jasiunas, EKSPLA CEO. – “It is clear that even such a small countries as Lithuania and Hungary can make the biggest contribution to the future of lasers.”