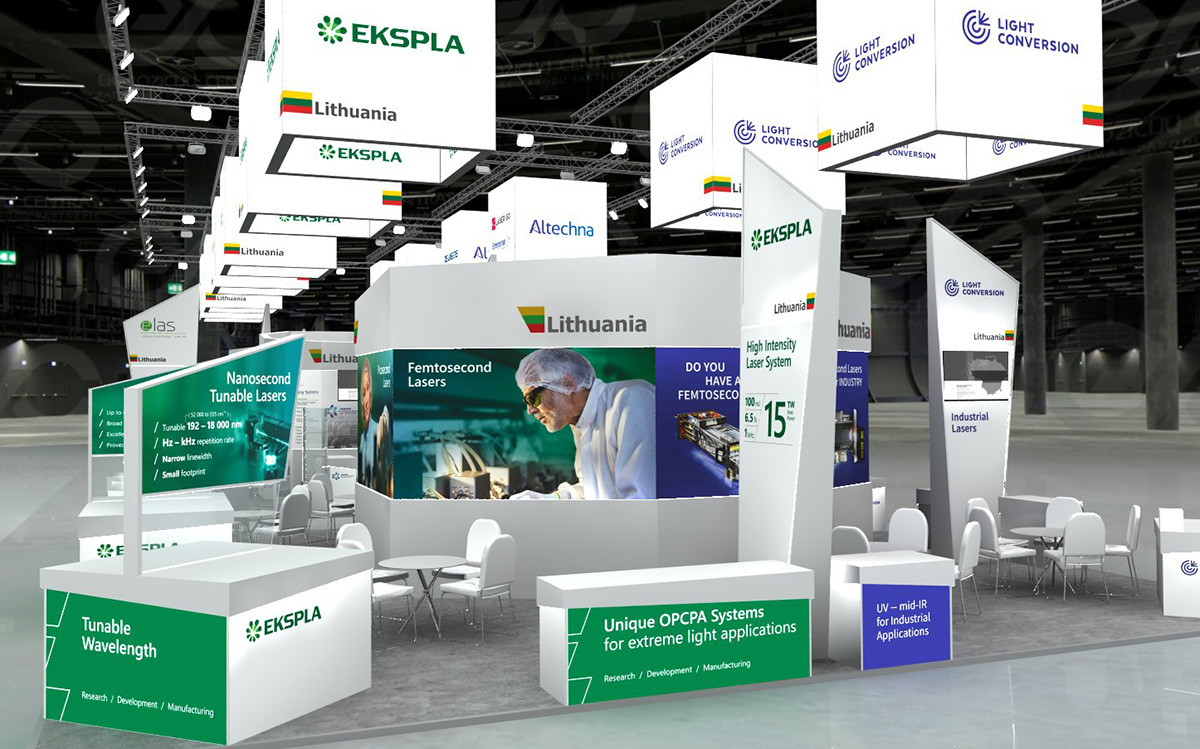 On June 24-27 Lithuanian laser manufacturers will present their latest technologies in the most important laser industry event “Laser World of Photonics 2019“ in Munich. The Lithuanian National stand will cover an area of 313 square meters, and will house 18 Lithuanian laser companies.

“This exhibition provides a great opportunity for Lithuanian laser professionals to attract new customers and to increase sales. Our manufacturers obviously dominate in the segment of scientific lasers, and their ability to consistently deliver high quality advanced solutions gives a competitive advantage in competing for industrial orders. This offers excellent future growth prospects of the sector. At the same time, it should be stressed that Lithuanian laser manufacturers are fully aware that acting unitedly under one flag is the best way in achieving own goals when representing such a small country like Lithuania. By creating a strong and common image of Lithuania as a country of laser industry to be seen abroad, the companies also boost their visibility”, – says Daina Kleponė, the Managing Director at Enterprise Lithuania which coordinates the national stand.

Professor Algis Piskarskas who is the President of the Laser Association emphasizes that sense of community and synergy are the distinguishing features of Lithuanian laser professionals.

“The association unites more than thirty companies involved in the laser industry. The companies treat each other as partners – we are looking for useful points of contact for the collective achievement of the goals of business and science. Such cooperation is much more useful for the companies than fierce competition”, – says Professor Algis Piskarskas, the President of the Laser Association, who is convinced of this fact.

The congress that is run in parallel with the exhibition “Laser World of Photonics 2019“ attracts authoritative minds of laser technology from all over the world. The number of participants in the congress is expected to exceed one thousand. It is also expected that the exhibition will attract about 32 thousand visitors, and about 1.3 thousand companies from 42 countries will present themselves at the exhibition.

“We participated for the first time at this exhibition 30 years ago. We then presented our first own constructed laser. After the exhibition, this laser was sold in Germany and did not return to Lithuania”, – Petras Balkevičius, the director of EKSMA, remembers the success of that time.

It is already the seventh time that Lithuanian laser manufacturers participate at the exhibition “Laser world of Photonics 2019“ with a national stand.

“The conception of the national stand that was initiated by the companies “Light Conversion” and EKSPLA over the 12-year-period has developed into a project that is of great significance for Lithuanian laser professionals. This time, this unique Lithuanian national stand will probably be the richest compared to the previous ones – it will present such advanced technologies as software for laser machines, optical components, research and development services, femtosecond lasers, micro-processing machines”, – recites Martynas Barkauskas, the director of “Light Conversion”.

Laurynas Ūkanis, the Project Manager at EKSPA, tells that, compared to the stand that was organised in 2017, the area of this year‘s stand almost doubled. The organisers managed to involve in this common project almost all more or less active Lithuanian laser and component manufacturers – the number of the stand participants increased from 12 to 18. According to him, start-ups also are very much looking forward for this event which takes place only once every two years. “Every year, several start-up companies, that are determined to repeat the success of EKSPA and “Light Conversion”, appear among Lithuanian laser photonics companies. There could hardly be a better springboard for them than the world’s largest laser fiesta which takes place once every two years”, – says L. Ūkanis.

The growth rate of Lithuanian laser sector is 10 to 15% per year. It is estimated that 90 of the world’s top 100 universities use Lithuanian lasers. The sector’s turnover has almost doubled over the last five years and today it exceeds 130 million euros. Ten years ago, only 10 companies operated in the sector. Today, the products are delivered to consumers all over the world by 40 companies that employ more than a thousand highly skilled professionals. The companies of the country export their products to 100 countries, the buyers include the largest EU, US and Japanese laboratories and research centres.