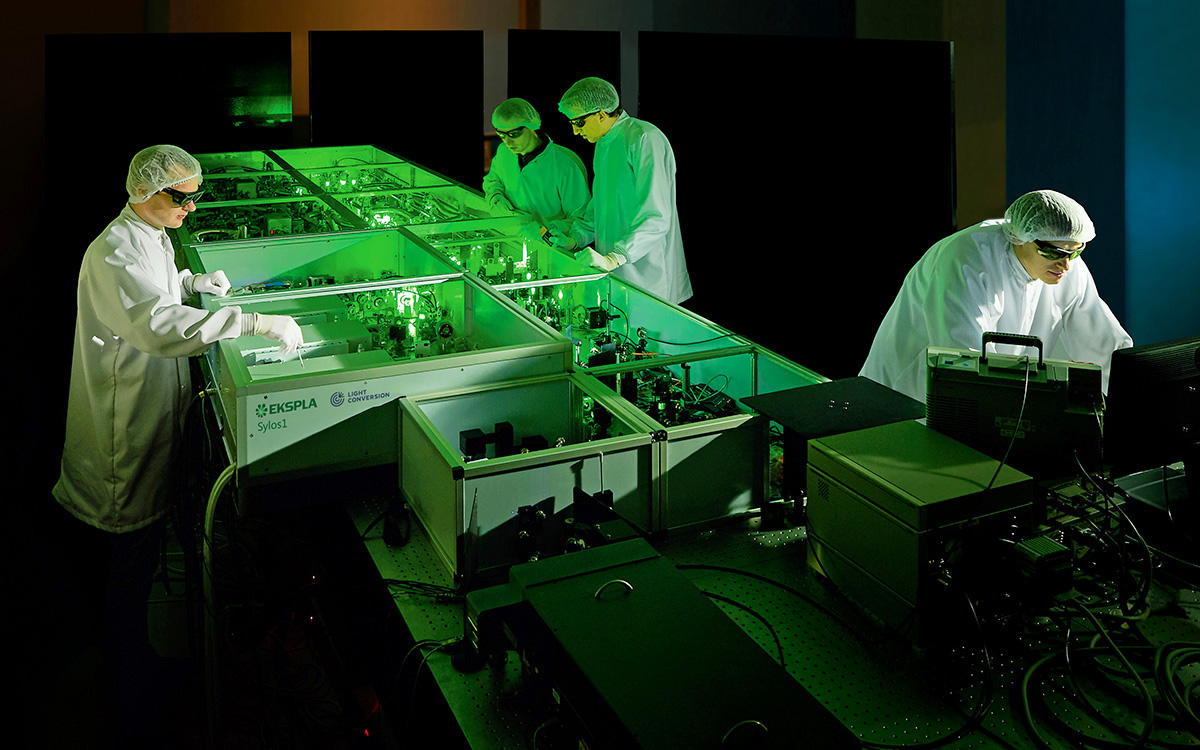 The global success of TV mini-series Chernobyl reminded the world of the dire consequences that poorly managed nuclear power could bring. Even though the production of nuclear power emits considerably less greenhouse gas compared to fossil fuel-powered plants, it remains a potential threat to the environment.

The process of producing power via nuclear energy creates radioactive nuclear waste as a by-product, which is then stored in sealed containers for hundreds and thousands of years. As no technology can nullify the harmful effect yet, possible spillages are raising concerns globally. Two Vilnius-based laser technology companies – Light Conversion and Ekspla – developed a laser which could solve the nuclear waste management problem.

The peak power of SYLOS exceeds the power of a nuclear plant by thousands of times, and impulses of this kind can be applied both to research and to nullify the impact of nuclear waste.

“Currently, the disposal of nuclear waste is comprised of either storing the waste in containers on above-surface level or burying them underground, depending on the decay period of the radioactive material. This method is raising safety concerns, as some of the waste is disposed not too far from densely populated areas, and highly radioactive waste has to be safely stored for up to tens of thousands of years,” said Dr. Artūras Plukis, Head of Experimental Nuclear Physics Laboratory at the Center for Physical Sciences and Technology in Vilnius, Lithuania.

The SYLOS high-density ultra-short pulse laser system might become a much-needed solution. If the process of nuclear waste decomposition is accelerated by a laser of this kind, the decay period can be cut short to seconds, hours, or months, depending on the material.

However, several challenges are yet to be met before laser systems like SYLOS could be applied on an industrial scale, according to Darius Gadonas, Head of the Scientific Laser Systems Division at Light Conversion, a Vilnius-based co-developer of the laser.

“We do believe that lasers like SYLOS can be adapted to solve the nuclear waste issue globally without leaving it for future generations to deal with. How soon this could be achieved will depend on the political will of governments, since lasers and infrastructure of this kind could cost up to billions of euros per unit,” said Gadonas.

It is no coincidence that the laser technology of such potential is being developed in Vilnius.

The city is home to numerous laser developers and has an educational system geared towards providing the companies with a highly qualified workforce. Currently, more than 100 students enter studies of physics every year, and about a half of them continue on studying light technologies. Most of these students start working for one of the laser companies during their studies. In general, Lithuania holds the third place in the European Union for STEM bachelor graduates per capita.

“There are now 44 laser industry-related companies in Lithuania, and most of them are located in Vilnius. The lasers made in our country are used at NASA, CERN, and countless technologies companies, such as IBM, Hitachi, Toyota, and Mitsubishi. Finally, 90 of the world’s top 100 universities are using lasers made by scientists in Lithuania,” added Gadonas.

The Lithuanian tradition of laser development dates back to 1970 when the School of Laser Physics was launched at Vilnius University. At the moment, the global laser technology market is dominated by two types of technologies: the chirped pulse amplification technology, invented by Gérard Mourou, and the optical parametric chirped pulse amplification technology. The latter technology was co-developed by Professor Algis Petras Piskarskas, one of the key figures behind the School of Laser Physics in Vilnius.

The long-lasting laser research tradition present in the city, combined with the educational system preparing highly qualified physicists, has led to Vilnius becoming a hotbed for laser technology companies.

“Vilnius is perfect for laser-oriented businesses to develop. A full-fledged production and supply cycle is established, as companies can access a pool of competent staff and source the materials and components needed from several top-grade local vendors. The physics department at Vilnius University prepares the needed specialists, and the Lithuanian Laser Association has plans to establish a Competence Center,” finished Gadonas.